Welcome to the Official Site of Tadashi Ogasawara, Kansai representative of Yorozu Kyogen as born of the Nomura Manzou Household. (Nohgaku Master Instructor/Performer in the Izumi-ryu form.)

KYOGEN was originated during the KAMAKURA and MUROMACHI Period, in the14th century. It is the only theatrical entertainments in the world which have succeeded as long as 650 years. KYOGEN and NOH was registered as the 1st World Intangible Cultural Heritage in 2002.

The two origins of KYOGEN may be traced back up to the ancient times. One is KAGURA, an ancient form of Shinto dance accompanying music. The other is SANGAKU which were introduced during the ASUKA and NARA Period from China of the ZUI and TOH Period.

SANGAKU included various forms of entertainments such as magic, jugglery, acrobatics, sorcery and others. Also it has been influenced both from GAGAKU, court music and from GIGAKU, masked drama. These two art forms were introduced from China at the same time with SANGAKU.

From SANGAKU to SARUGAKU and NOH

SANGAKU lost the patronage of the rulers in the HEIAN Period when the capital was transferred from Nara to Kyoto and at the same time became popular among the ruled. This art form combined Japanese ancient classical songs, instrumental music and performances and also it produced funny and mimic entertainments. It began to be called SARUGAKU, because “SARU” stands for monkey and a trained monkey is good at mimic of man. Also “SARU” is phonetically close to “SAN”.

SARUGAKU was divided into two parts, KYOGEN and NOH. They were brought up as ‘twin brothers’. KYOGEN is so-called farce, which often deals with human beings and lives, so sometimes is called as human comedy. On the other hand, NOH is a tragedy usually among aristocratic circles, gods and spirits. KYOGEN is a dialogic play with mainly speech while NOH is organized mainly by music and dance, thus called musical theater. KYOGEN dialogue comes from the common spoken language of the MUROMACHI Period while the language of NOH is highly literary in style.

SARUGAKU was polished further by ZEAMI, an unparalleled genius of player and producer, in the MUROMACHI Period. Under the patronage of following TOKUGAWA Shogunate, SARUGAKU became popular among samurai class.

Since the beginning of the new MEIJI era, SARUGAKU officially began to be called NOH, because “ SARU” is monkey itself and SARUGAKU stands for “playing like the ape” . “NOH-GAKU” is the general term of KYOGEN and NOH.

KYOGEN expressions about the change of scene and time

As he walks around on the stage, a KYOGEN actor can perform the change of scene and time instantaneously. The features of this expression are as a following example.

“I must hurry on my way. Truly, I have never been to Paris, there is nothing more amusing than the sightseeing worldwide. Today, I am certain I will enjoy myself. Well, here I have already come to Paris”. We could go to Paris in a second with the KYOGEN expressions..

KYOGEN performance must be enjoyed by full imagination!

The NOH stage is quite simple and KYOGEN does not need big stage settings and properties. A KYOGEN actor explains almost everything by his words and acting.
Accordingly, the audience of KYOGEN should be able to image freely everything on the stage by his sensitivity. In that sense, KYOGEN audience can take part in the drama itself. Indeed, this is the enjoyment to appreciate KYOGEN by maximized imagination. 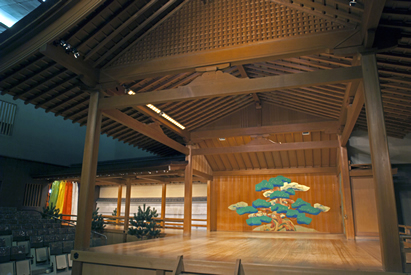 The way for Practicing KYOGEN

KYOGEN practice is made by instructing by words of mouth under the master.
KYOGEN has been inherited from the father to his son for by mouth to mouth.
Indeed this is the secret to success that KYOGEN have succeeded for long period, 650 years. For pupil practice starts from imitating all words of lines with a certain intonation and then after accomplishing all lines he can move to mimic master’s acting to practice until he can perform it automatically. Breathing from the abdomen and speaking with a loud voice is important. When he performs laughing he must use his whole body, not merely his mouth.

Two KYOGEN of school exist at present, the IZUMI School and OOKURA School. There was previously another school called SAGI but its heritage died out during the MEIJI Period.

【 The different Styles of Kyogen. 】

A lot of characters are involved in KYOGEN.

TARO-KAJYA (and JIRO-KAJYA)
Most common characters, general servant
Not only stupid but generally clever than his master
Ex) BO-SHIBARI (Tied to a Stick)
DAIMYO ( or Master)
Master of TARO-KAJYA, bluffer but sometimes innocent and lovable
Ex) HAGI DAIMYO (The DAIMYOU and the Bush Clover)
YAMABUSHI
Buddhist monk leading an ascetic life in fields and mountains
Sometimes betray ignorance and powerless
Ex) KAKI YAMABUSHI (The Persimmon Thief) 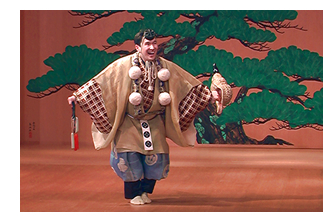 Classification by the types of laugh in KYOGEN

The types of laugh are very rich in contents of about 300 plays as follows.

KYOGEN actor plays an important part even in the NOH drama.

KYOUGEN actor performs an important part called AI-KYOUGEN in the NOH.
There are three ways of performance

There are about 70 KYOUGEN songs. KYOUGEN actor recites the certain song in the drama at the scene of a drinking bout and the like. They include two kinds of song. One is sourced by the NOH drama or the parody of NOH. The other comes from the medieval old songs, Every songs are accompanied by dance. The practice of KYOGEN always starts from singing and dancing before playing KYOUGEN drama.