Welcome to the Official Site of Tadashi Ogasawara, Kansai representative of Yorozu Kyogen as born of the Nomura Manzou Household. (Nohgaku Master Instructor/Performer in the Izumi-ryu form.)

■ On Kubihiki
An interview with Ogasawara Tadashi, performing in Kubihiki, July 2008 taken from, The National Noh Theater Sendagaya Newsletter vol. 5

■Is this the first time you will play the lead “shite”-role in Kubihiki? (Neck-Westling with Demons)

I have played the supporting roles for Kubihiki, Chinsei-Hachiro (Minanoto no Tametomo) and the even lesser role of the Hime-oni (the demon princess), but this will be my first time as the lead.

■What makes Kubihiki an interesting play?

In my case, I have a six-year-old son with whom I watch the Ultraman series. I see that, for most part, children recall a sense of exhilaration when they see monsters and beasts defeated. When I was young I felt a tremendous amount of joy from watching such events too.  And yet, as an adult, I enjoy performances by watching the social situations and customs played out on stage. Kubihiki itself is a play that can be enjoyed in many ways. It’s the story of Chinsei-Hachiro Tametomo, a Heian era martial arts superstar who defeats demons. For children, the thrill of the show comes from seeing the lone hero fight off hordes of demons and a large-scale battle provides them with a great source of excitement. Adults on the other hand, enjoy warm laughter from watching grim demons blindly and devotedly indulge their children. In my case, I try to give expression to these enjoyable moments not only by using my talents as an actor, but by considering and appreciating my position as a parent as well.

■In the two performances that you will give will you play the opposite roles of the demon parent and demon princess?

Yes, and acting these opposite roles on the same day is quite a rare event. For me it is a very precious experience. The role of the demon parent, of course, I play from the viewpoint of a parent, but when I play the demon princess, I remember the things that my daughter in the 4th grade and entering her rebellious years does to me regularly, and I exaggerate them on stage as a strategy to play the role of the princess who is taking advantage of her parents. (laughter) This is a perfect example of how Kyogen is influenced by life. This is not a story about a special family, it is a theme shared by everyone, which is why it has endured for such a long time.

■How should children appreciate this work?

I would like them to appreciate the performance without any unnecessary preconceptions of what it should be, and appreciate it as casually and naturally as possible. I have presented kyogen to young children in performances at elementary schools and had an odd experience at one of them. I was told that only the students in higher grades would be allowed to watch the performance. When I asked if the younger children were busy with special activities I was told that kyogen is it is too difficult for students in the lower grades, and if they were to start making noises that they would be a nuisance, so it was decided that only the older children were allowed to participate. I asked them to revise their decision and include younger viewers, explaining that younger viewers would be able to more naturally enjoy the performance.

Basically, adults have the preconception that a performance should be appreciated in a certain way and think that children have their own ways. This thinking is flawed. For young children to feel a performance just as it is, is for them, the source of a special type of nutrient. Children have a “culture shock” from just the sight of an out of the ordinary, empty stage. How much more of a thrill it must be to see a live stage performance? There is surely no way to believe that they would not be inspired. With images, one can only see what the maker of them wants to show, but with a live performance, the result is completely different. The beauty of a live performance is that audience can ask themselves, is this pine tree on stage real or not? What about the color of the costumes, and their fitting? The benefit of a live performance is that the audience can appreciate and focus on whatever they like. This is the same for children and parents alike.

People ask me why kyogen is such a distant art form, and I would say that this is because of the different vocabulary used in a kyogen play. People avoid it due to the stress of not knowing the special vocabulary. But, when a foreign opera singer has a performance in Japan, theatergoers accept that they will not understand the foreign words sung on stage as a precondition of the performance. As a matter of fact, they enjoy aspects other of the play. They enjoy the rhythm of language, the atmosphere of the stage, etc. As for myself, when I go abroad and give a performance, for example, in France, they dislike having the entire performance explained and having a preconceived notion of the play pushed upon them. This time the there are three simple plays, with wonderful actors performing, and so both children and adults should be able to enjoy the performance by setting aside the meaning of words and leaving out unnecessary explanations and prejudice.

■What are your thoughts on “kyogen for Parents and Children”

There must be many parents who are worried that their children will make a ruckus and disturb the performances, but, in this group, the point is for parents to enjoy their children’s honest responses to live performances, a chance that can absolutely not be had anywhere else. Adults themselves will have some fresh discoveries too, and with this in mind, both parents and children can enjoy the performance and respond as part of an audience, which another wonderful benefit of attending a live kyogen performance.

■To change the topic, do your children resemble you?

They certainly do resemble me. Especially my strict nature! (Laughter). They are constantly imitating me. Even though I haven’t given them any direct instruction, after watching my stage performance of “The Owl Cry and the Mountain Monk” fukuro-yamabushi, they cry out with a “whoo whoo” as the owl in the play does. With Kyogen there are many imitative expressions that have an amazingly large impact for their short phrases, this is certainly another one of its charms. In our current performance, “Prayers for a Healed Hip” Koshi-inori, the spell of the reclusive mountain monk are given as, “gong! gong!” and the calls describing the rope pulling match of Kubihiki are given as, “eee sarasara, eee, sarasara.” Interesting phrases such as these come up quite often and are worth watching for.

■How many times have you performed at the National Noh Theater?

This will be my fifth time. I originally trained at the National Noh Theater and I think of it as my home turf. When I stand on the stage there I have a deep sense of feeling, and I am extremely happy to have the opportunity to give performances at the National Theater often. I myself underwent training there, and just this year I recently jointed the Japanese Noh Theater Actors Association. I feel that by continuing my efforts, I will be able to indeed give some encouragement to other senior actors.

■Lastly, could you please give a message to those will watch a Kyogen performance for the first time?

I would encourage them not to feel intimidated and remind them to enjoy. With a live performance they should feel free to interpret it in any way they like. It truly is enough to enjoy Kyogen casually. They should without a doubt be able to discover something new for themselves in a Kyogen performance.

“Kubihiki” is the about a man who finds himself wrestling with demons. Chinsei-Hachiro Tametomo, upon traveling through a deserted field is suddenly attacked by demons. After being captured is to be fed to a demon princess. However, the Tametomo challenges the demons to a fight, and if he loses he will indeed be eaten. First, it is the demon princess who enters into a contest of strength with Tametomo, but she cannot win against his remarkable strength. Later, Tametomo enters into a rope-pulling contest against all of the demons, and a rope is tied around his neck and on the other side, around all the necks of the demons. And so with this, the “neck pulling” or kubihiki commences...it is a humorous play, where the audience can laugh at the nervous suspense of the demon parents who dote desperately over their daughter. 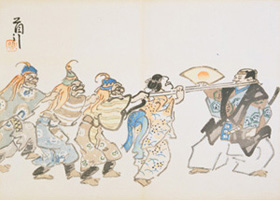 Encountering Kyogen: My life and my dream.